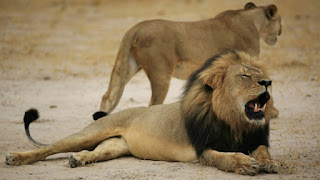 Even writing this article, tears are streaming down my face. A 13-year old lion was lured out of a Hwange National Park, in Zimbabwe and murdered for the fun of it. He was protected in the national park. Cecil provided protection to his lionesses when they were with cubs. He fought off other males who would eat the young.


“Palmer is believed to have shot the lion with a bow on July 1 outside Hwange National Park, after it was lured onto private land with a carcass of an animal laid out on a car. Some 40 hours later, the wounded cat was tracked down and Palmer allegedly killed it with a gun.”

My entire family are animal, lovers. I have dreamed of going on safari to watch African animals in their natural habitat. I have walked up to elk and given them water out of my hands in Grand Canyon State Park. I feel the pain of the world as an empath. This horrible travesty will set the world on its ear.
A dentist paid 50,000 so that he could bow hunt and shoot to kill this amazing lion. A gun does not make a man manly.  The world will make him pay for his ego. We shall see how he feels about being the hunted in a Zimbabwe prison. I doubt he will last a month. An example will be made of this man. A professional hunter and a farmer have already been arrested.


I ask that this event ensures changes in hunting practises. I pray and ask you to pray with me that Cecil’s death is not in vain. I pray that this will put a stop to the hunting of lions.
You can reach Jennifer Elizabeth Masters here.