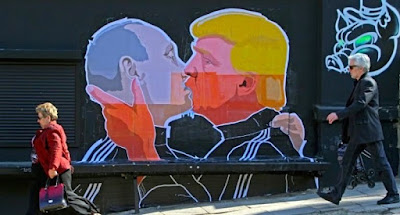 Many of us were shocked at the outcome of the 2016 election, including Donald Trump. His face told it all, he was clearly shocked and surprised that he won.

What is even more surprising is that President Obama had knowledge of the fact that Russia had intervened prior to election day. The media played a large role in ensuring that Clinton was tarnished right before the election with the resurgence of the e-mail issue.

Do you want a president who is in bed with a foreign government that could undermine our economy or worse?
Do you want a president who has so little control over his emotional reactivity that he fights with young girls on Twitter about her comment? Do we want someone behind the wheel of our country making rash decisions? Trump has already proven he isn’t fit to be president. He doesn’t have political experience and he certainly lacks emotional maturity.
While our nation is asleep, Trump is sending out missives via Twitter when he is in the dark about the facts. Should a President elect be sending out information via Twitter that could incite retaliation from other governments and Isis?

Author’s Note:
What is funny is that when asked over a year ago, I felt Obama wouldn’t leave office and would stay in as president. I am not sure if this is even possible, but at least until this mess is sorted out, this is an unprecedented time. In unprecedented times great things can happen. We are at a pivotal time in the world’s history, not just the history of the United States. When things are unstable in the US, they are unstable all over the world. Make a note on your calendar and set your alarm to make your phone calls first thing in the morning. Flood your governor’s office with phone calls, call the white house! But do something – anything – even if it is to pray for the good of all people of this world. Everyone matters, especially you!

At least with Obama, we know what we have.
A Ten Point Plan For Resisting Russia’s Takeover

Obama had proof prior to voting day but withheld this information of the WikiLeaks hack into thousands of e-mails which turned the election in Trump’s favor. Why didn’t he release this news before the election? We all assumed Clinton would win, maybe he did too.

“The Republicans who were briefed on Russia’s intervention in our election pressured Obama to keep this information secret, especially Mitch McConnell and James Comey are complicit in Putin’s actions. If Paul Ryan was present, he’s also complicit. They put their party ahead of their country.”

Clearly, there is enough evidence that Trump, Mitch McConnell and James Comey aren’t fit for public office. We all need to do something. What can one person do? Plenty! The power of ONE is an amazing force. If each one of us contacts our senator and governor on Monday as suggested in the link above we can make a difference.
Sound The Alarms As Trump Picks His Cabinet!

Trump is increasing taxes for middle class and single mothers
Don’t just sit on your hands expecting someone else to do it for you. Each of us is responsible and powerful. When we band together we are a force to be reckoned with! Call for an interim president, or a new election. I’ll be on my phone first thing Monday morning.
Who Voted Against The Violence Against Women Act

Tweet to Donald Trump @RealDonaldTrump
#Obamastays  #Putinspuppet #Obamacaretakerpresident
According to ABS news, Lisa Monico President Obama’s security advisor said that Obama would file a full report before he left office on January 20th.
“The President has directed the intelligence community to conduct a full review of what happened during the 2016 election process,” Ms. Monaco said.
“And to capture lessons learned from that and to report to a range of stakeholders, to include the Congress.”
Citing US officials briefed on the matter, the Washington Post and Reuters have reported intelligence agencies identified individuals with connections to the Russian Government who provided WikiLeaks with thousands of hacked emails from the Democratic National Committee and others, including the chairman of Hillary Clinton’s presidential campaign.
The report said the CIA found the intention was not only to undermine confidence in the US electoral system, but briefers have told US senators it was “quite clear” that electing Mr Trump was Russia’s goal.

I always recommend that people do their own research and make up their minds. What I do know is that people who voted against the violence for women act need not to be in office in 2017!

A total of 138 House members voted against reauthorizing the intact bill, including nine GOP Congressmen — Paul Broun, Scott Garrett, Louie Gohmert, Tim Huelskamp, Walter Jones, Steve King, Thomas Massie, Tom McClintock and Matt Salmon — who vowed on Wednesday to strike down any version of the bill — even the heavily amended version their colleagues tried to push through (unsuccessfully) before considering, and passing, the Senate’s bill.
And yes, in case you were wondering: House Majority Leader Eric Cantor — the de facto leader and brain behind the post-2012 Republican Party — voted nay.
Here’s the full list:
And, for old time’s sake, here’s the list of Senators who voted against the Senate version of the bill in April of 2012: